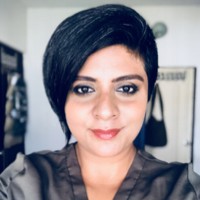 Alternative and a lateral thinker, you cannot expect mundane and boring from Sangeeta. Her eclectic multi talented family always encouraged her. Their decision to put her into Woodstock School also fuelled her creative fires for her whole 12 years of education. She picked up a camera when she was in secondary school and a JVC handy-cam in high school. She edited her first film about her classmates as Seniors.

Music, Photographer and Videography ran in her blood line from the start. And she bloomed through her Bachelors of Arts with an English major at St. Xavier’s College, Mumbai where she wrote, directed her first play during 2001 Ithaca.

Sangeeta never wasted time, the day her exams finished she interned as an Editor at USL studios after which she moved to Filmfare and was a copy editor for a few years. TV came calling and she moved to Aaj Tak-Headlines Today and NDTV where because she often shot and edit her own stories. Through her TV adventures as an Entertainment Anchor she hosted Nite Out, The Big Ticket, Mad Mad World and EQ as well as produced several featuretes. But news was limiting especially in terms of qualitative production. So Sangeeta began freelancing and set up a small studio and began small scale and sometimes big scale corporate work and moved into wedding story features as well.