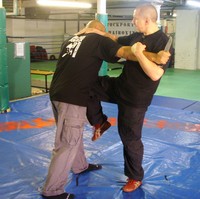 As well as having been an Instructor with the International Krav Maga Federation, I’ve trained with the Israel Krav Maga Association in Israel.

I was earmarked by my Goju Ryu instructor to take over the running of the club; he had been trained by Yamaguchi Hanshi who was trained by the famous Miyagi, founder of the style and one of the most revered figures in the history of the Okinawan/Japanese martial arts. Consequently, I’m proud of my lineage in this style and although we now train very differently, this solid background in the traditional arts that both Leo Negao (my Co-Chief Instructor, 4-time World Champion in Brazilian Ju Jitsu) and I enjoy has strongly informed the way we have developed our system.

Some of the good stuff in traditional martial arts has been misinterpreted and/or obscured over the years and needs adapting to reality. And too many martial arts focus on a variation of 'one-to-one' fighting in a ring between people of equal weights.

That’s why I teach people need no-frills, effective self–defence techniques that can be learned quickly and are clearly applicable to real situations and that don’t require levels of strength, fitness and flexibility to which only professional sports people can aspire.Some Testimonials:

“Your knife work is superb”

“(your seminar) was superbly practical and clearly proved why so many techniques that look good are of little value in real life close encounters. Your style is the best out there for self defence.”

“If you want to know about Krav Maga, then check out the 6-disc DVD set by Stewart McGill…This is a very comprehensive, very instructional, first rate product presented by people who know what they’re doing…for anyone who has an interest in Self Defence, these 6 DVDs should have some space on your shelves.”

“Urban Krav Maga is a no-nonsense martial art that works!”

“A great training session, thank you.Feedback from the group was very positive.”